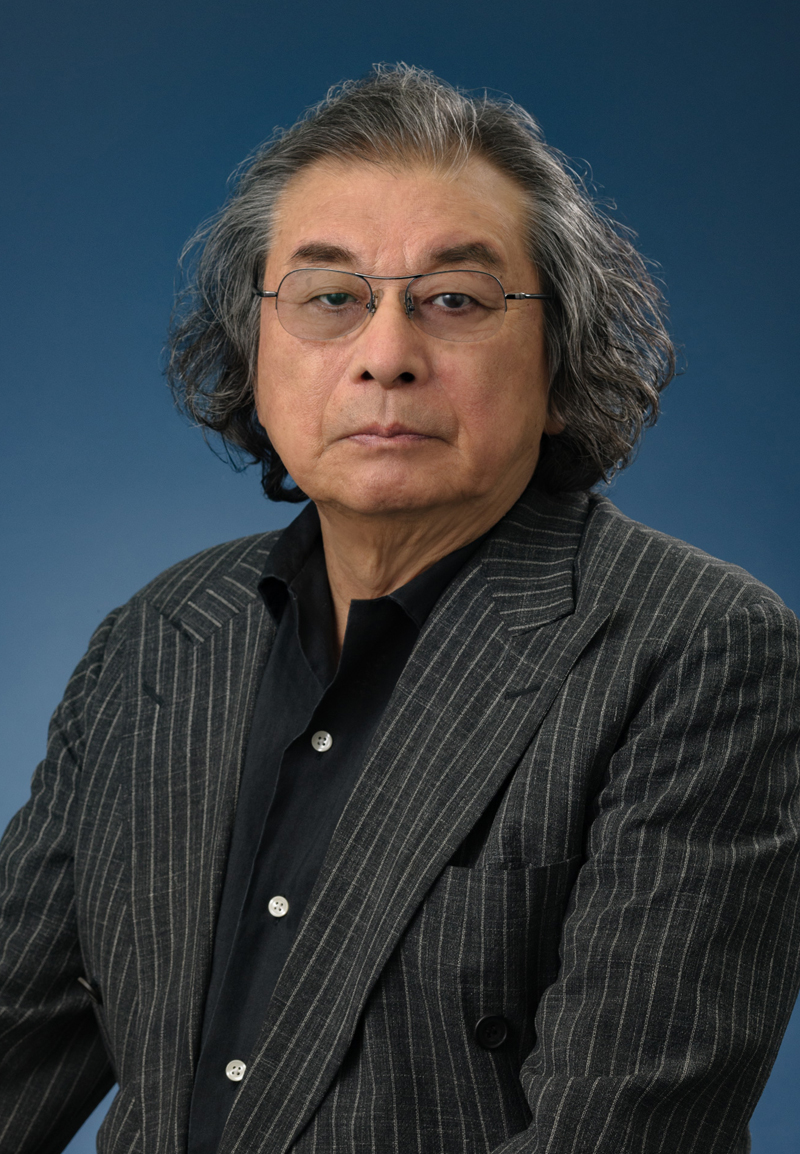 Motoo Nakanishi was instrumental in adapting the Western corporate identity (CI) concept to Japan and fostering it in the country. The late 1970s, when CI initiatives became more active in Japan, coincided with a period when the Japanese economy was moving from high growth to maturity, following the 1964 Tokyo Olympics and the 1970 Osaka Expo. At the same time, many Japanese companies, such as Sony and Honda, were expanding overseas in search of new markets, and Japan was in the midst of internationalisation. Against this backdrop, many companies were seeking to rebuild their philosophies and to establish a corporate image that would be accepted internationally.
Prior to this, Japanese companies did not consider the idea of designing logotypes (designed letters such as company, product or brand names), symbols (symbols representing companies, organisations or projects) and symbolic colours as a whole, but used traditional family crests and trademarks as marks and symbols as they were. This made it difficult for the company to be perceived as a coherent entity, despite the fact that it offered excellent products and services. It was at this point that PAOS, led by Nakanishi, succeeded in creating a corporate identity, or CI, that was designed to embody the corporate philosophy. This was the driving force behind the expansion of the interpretation of "design = product design" to "design = corporate management resources". Another noteworthy aspect of PAOS' work is the adoption of open-systems in projects. PAOS works with freelance designers and researchers as well as designers within PAOS, so that they were able to achieve the best possible design outcomes for their clients. (NTT, for example, employed Yusaku Kamekura, a master of graphic design known for his poster design for the Tokyo Olympics, with great success.) This means that collaboration, alliances and other ways of working, which have become widespread in the internet society since 2000, were already in place more than 20 years ago.
PAOS's work is different in nature from the designer's work-oriented approach. The main body of work is management consulting, and design is the result of that consulting, and belongs to the client company. However, it is a very important design archive for Japanese design. 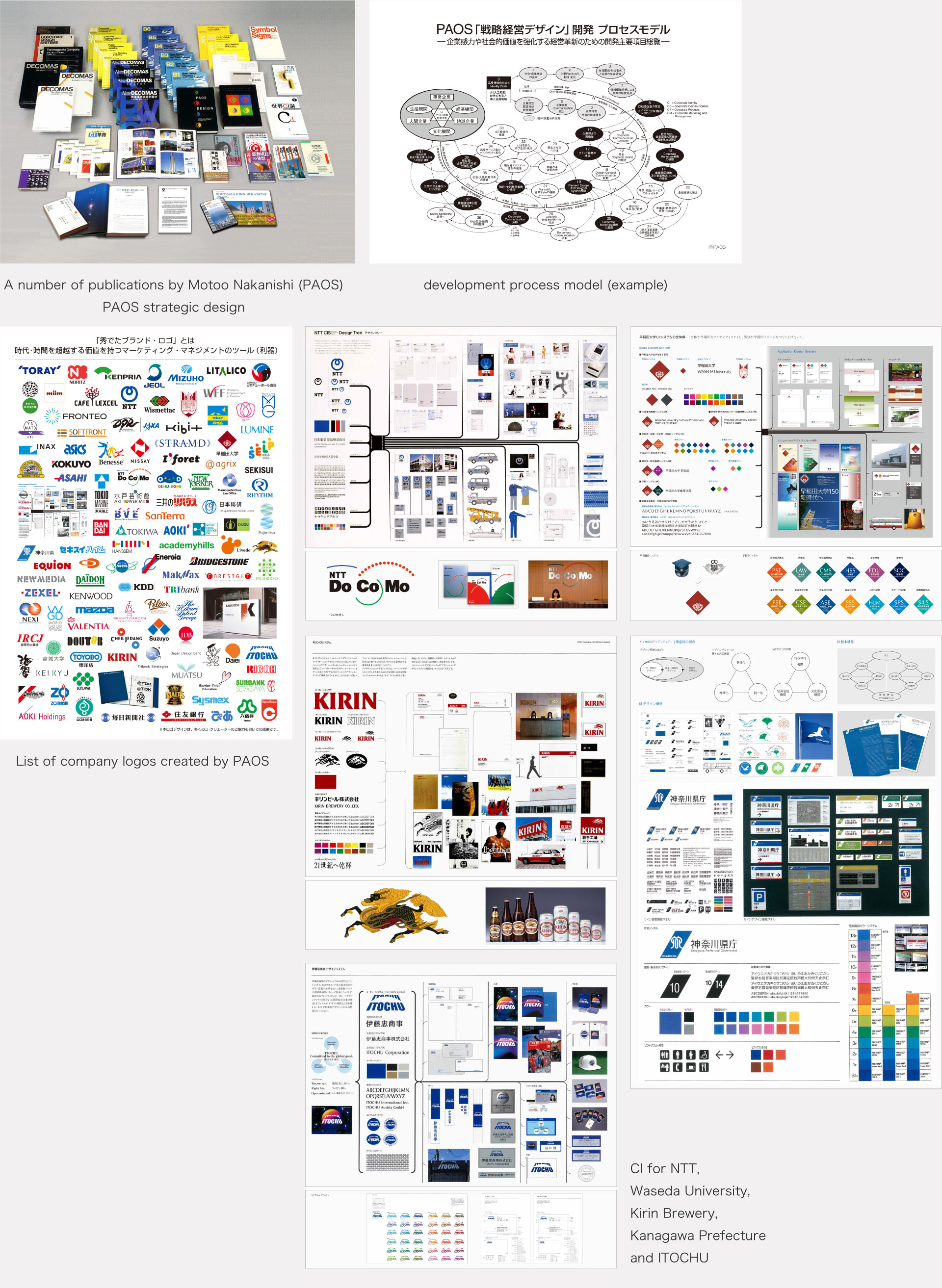 What we've consistently done is all about "design thinking" and its practice.

― Mr. Nakanishi, you founded the PAOS organisation to introduce the concepts of corporate identity (CI) and brand design, which had previously been largely unrecognised in Japan, and have worked with over 100 companies on CI and visual identity (VI), brand and business development. You have provided management consulting to numerous companies with design. The record of your work can be seen as an important document and archive for the history of design and corporate management in Japan.

Nakanishi PAOS was founded in 1968, so next year (2018) it will be 50 years old. During that time, PAOS has provided management consulting to more than 100 companies, with the perspective of 'design' at its core. We have helped companies visualise their corporate philosophy and business approach through methods such as CI/VI and brand design, as well as symbol marks, logotypes, signs, printed matter and, more recently, web design. We recognise that the design work we have undertaken is different from the pure design focus of so-called designers.

― Yes, the design work done by PAOS is only a means to a management strategy, and what is important is the strategy and concept behind the company's existence and business development. The CI manual that I have seen before contains a vast amount of design philosophy and know-how, and I think it is an important design archive in itself.

Nakanishi We work on CI/VI consulting and development over a span of several years, and eventually deliver them to the client company in the form of a series of manuals or software assets. After that, the client company develops its own CI/VI in accordance with the manual, so we consider these to be the client's management resources rather than PAOS's design archive.

― However, a great deal of research and design work has been carried out by a wide range of specialists before a single manual is completed. There must be a lot of information and knowledge that didn't make it into the manual. What is the current status of these materials?

― What are they exactly?

Nakanishi There are some 350 CI and brand strategy manuals collected from prominent companies around the world. There are also materials used as references in consulting, data and reports collected and produced by PAOS itself for each project, and design works such as logo and symbol mark idea sketches and studies, but there are so many that even I can't remember them all. The important matter is how to take over and utilise these global materials in the future.

― While studying at Waseda University, you established your own design research group and conducted research that would become the forerunner of PAOS. As a part of this research, you started to write directly to big companies in Europe and the US such as 3M, Coca-Cola, IBM, British Railways and so on to collect design manuals.

Nakanishi We thought it was important to find out what was really happening in Europe and the US, which were one step ahead of us. What surprised me was that many companies offered their valuable manuals to a research group from a Japanese university. I was first of all surprised and impressed by the attitude of these companies.

― And you used them as a reference to further deepen your activities and compiled them into the book "DECOMAS ", which is still the bible of Japanese-style CI. "DECOMAS" stands for Design Coordination as A Management Strategy, and its publication in 1971 was the very first year of Japanese CI, with 10 editions in 30 years. You have since published a second edition, "New DECOMAS - Creating Design Conscious Companies" (Sanseido). There are many other publications, all of which can be regarded as a design archive, examining the practices of Nakanishi and PAOS.

Nakanishi Yes, that may be true.

― What was PAOS' goal in introducing CI, which originated in Europe and the US, to Japan in the first place?

Nakanishi From the outset, we have insisted on the creation of a uniquely Japanese CI/VI. For example, American design is marketing-oriented. The same tendency applies to CI and brand design. On the other hand, although this has changed considerably recently, Japanese companies have their own management climate and sense of existence, and are not necessarily marketing-oriented. In the late 70s, 80s and 90s, Japanese companies went from growth to maturity.The more conscious companies were more active in enhancing their corporate culture and beauty. In other words, 'beauty for use = beauty for good', and CI efforts were considered to lead to increased profits.

― That was the background to many companies working on Japanese-style CI in the 1980s.

Nakanishi Recently, we often hear the words "Design Thinking", but I think what we have been doing consistently is exactly "Design Thinking" and its practice. I personally think that CI is an expression of a company's thinking, management and sense of existence. That is why I think it is very important to document our activities in books and other media.

Nakanishi Logos, symbols and other designs are not eternal, they change with the times. Of course we try to propose designs that will last for a long time, but in recent years changes in the business environment, such as mergers and acquisitions, have sometimes forced us to change. However, a book of ideas and philosophies is an intellectual stock that can be developed and deepened with the times.

About the Design Museum

― What do you think about a design archive or a design museum in Japan?

Nakanishi I used to have a plan for a 'Kobe City Design History Museum Park', although it was cut short due to the Great Hanshin-Awaji Earthquake of 1995. I still have the proposal. At that time, under the leadership of Mayor Tatsuo Miyazaki, Kobe had its own business plan, supported by ample funds, to the extent that it was known as the "Kobe City Company". The Kobe City Design History Museum Park was one of these projects. As I was from Kobe City and had been involved in many CI and business designs, I was approached for advice.
In the 1990s, the CI boom had to settled down and people were saying, "It's all about brand design now!". For my part, I regretted that CI was only superficially understood, as it originally included the concept of brand strategy in the information society. Because of this, I wanted to propose a museum as a condensation of life and culture that was not merely a design exhibition of objects.

― What exactly was your vision?

Nakanishi In the 1990s, the bubble economy had burst and people's desire for material things had died down, and there was a growing demand for quality of life and culture. That's when we came up with the idea of a museum that would not only display design works, but would also collect and study the background and mechanisms behind their creation.
For example, the famous house of William Morris, who promoted the Arts and Crafts Movement in late 19th century Britain, will be recreated, with furniture and tools from the period and modern works of art displayed in the rooms, so that visitors can experience the germination of modern design as space and environment. The aim was to reproduce, as realistically as possible, the life of the same period in about 30 of these famous houses that reproduce the history of modern design, and to show the essence and role of design as a system through the people's living spaces and tools.
The Museum Park had even produced a model, but the Great Hanshin Earthquake struck and the city of Kobe was no longer able to do so. More than 20 years have passed since then, but it is a great pity that no design museum has emerged in Japan.

― Earlier, you told us that PAOS has five warehouses for its archives alone. I also heard that next year will be the 50th anniversary of PAOS. Do you have any plans for an exhibition or symposium to look back on the history of CI in Japan and at the same time to look forward to the future? I think this will be a very meaningful project at a time when the state of companies is changing dramatically.

Nakanishi  I am glad to hear you say so. As it happens, at the request of the Kanagawa Region of JAGDA (Japan Graphic Design Association), we recently held an exhibition at Yokohama National University called 'The World of Motoo Nakanishi', looking back over 50 years. We received many comments from visitors about learning about the world of design and its significance.

― Thank you very much for your valuable comments today.

For questions about Motoo Nakanishi's design archive,
please contact us via https://npo-plat.org.